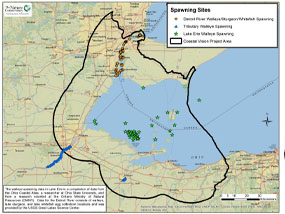 I know jigging season on the Detroit River is just now firing up. I know because I just spent a week getting tossed around and frozen pre-fishing and competing in the National Walleye Tour event out of Trenton. That, along with numerous Facebook posts, have me looking ahead to other opportunities to grapple with big pre-spawn and post-spawn walleye. If you’re paying attention to various websites and Facebook posts as part of your pre-trip planning, you’ll notice catches of large pre-spawn fish coming from ports you usually don’t hear about this early in the year. Ports in Ohio such as Vermillion, Lorain, Sheffield Lake, Cleveland, and even as far east as Geneva.

With current walleye estimates of up 150 million walleyes in Lake Erie, something has changed. Have spawning populations been pushed off their normal spawning grounds as a result of this population explosion? There appears to be a fair amount of spawning site fidelity in Lake Erie walleye, meaning they GENERALLY return to the same site year-to-year. So being forced out of their spawning sites is unlikely. What is more plausible is that the population explosion has resulted in changes to those isolated spawning pockets. Simply put, there are more fish spawning out east as a result of the growing overall population. There could also be some temperature related issues I touched on briefly in my “Timing the Spawn” seminar.

What does all of this mean to you? It gives you more opportunities to chase the largest fish in the system, when they are congregated to spawn, and as a result, are very to catch. If you have struggled at certain ports, now is the chance for you to go and work the kinks out of your delivery. If you’ve thought of casting to large pre-spawn fish, now is your chance. If you would like to get more familiar with a certain technique or area, and still be able to catch fish, now is the time. This cycle will not last forever, so take advantage of it now. As Lake Erie and the ecosystem changes, it affords us more opportunities to get outside of our comfort zone and become better anglers, while still targeting trophy fish. It doesn’t get any better. The three basins of Lake Erie are distinctly different from each other and will allow you to fish three different lakes, with differing conditions, with just a short drive. Take advantage and go chase pre-spawn fish in a different section of the lake. I’ll see you on the water.

Take your knowledge further on the Teachin Fishin Platform